We had a Science Lab party for my daughter’s 4th birthday a couple of years ago. My husband and I are both chemists, so we were pretty excited about this theme. We had a great time and the kids seemed to like it too!

Once everyone arrived, ate, and got settled, we moved in to our Science Lab Demo! The first thing was getting all of the kids dressed in their “lab coats.” I was really tempted to get little lab coats for all of the kids because they are super adorable. Everything that I found was outside of the price that I really wanted to spend for this part of the party, though, so we came up with a cheap alternative instead. We bought plain white t-shirts and cut them down the front. You could probably sew buttons on them, but we just used safety pins to fasten them closed. I found 5 packs of shirts for $10 and $2/kid was a little more of what I was looking for here. Super easy and cheap and it was still cute. 🙂

Everyone got dressed for lab and we got started with our experiments!

First up was the Elephant Toothpaste demo. This is a good one to start with because it’s one to watch rather than one to play with. Once they are busy playing and experimenting with all of the other activities, I think it would be hard to bring everyone back to something where they just watch. It got a good reaction from everyone.

Then, we moved on to Expanding soap in the microwave. We did a several bars and each kid got a little chunk to play with it. While they were all waiting for their soap, we had them work together to unroll a roll of toilet paper. We had planned to come back to this and mix it with the soap and water to form a play-doh. We got so busy with the other activities, though, that we never made it back to this. It maybe seemed weird to unroll the toilet paper for no apparent reason, but no one mentioned it. ha! 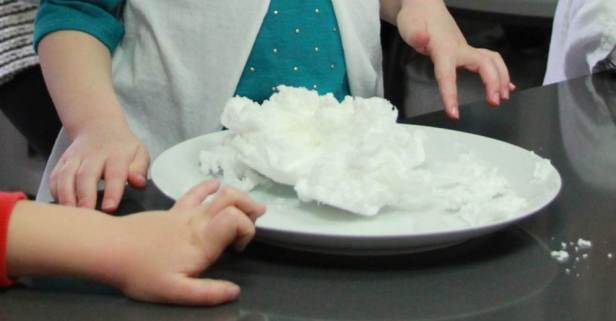 Next, everyone inflated balloons with chemistry.

After this the kids split up and cycled through a few different stations. We had a couple of water mixing stations with pipettes, beakers of different colors of water, and test tubes. 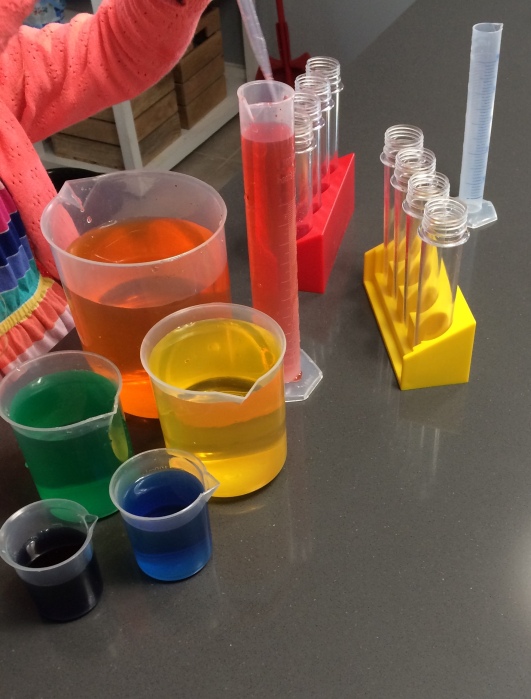 And, we had a slime making station. Some of the kids used the water that they mixed at the mixing station to make their slime and some of them wanted to save their water. We had conical tubes for taking home the slime and/or the water if they wanted.

And, we also had a coloring station with printed science themed coloring pages and art supplies.

It was really a lot of fun.  After it was over and everyone had gone home, my daughter asked if we could “do the party again tomorrow.” I count that a success!